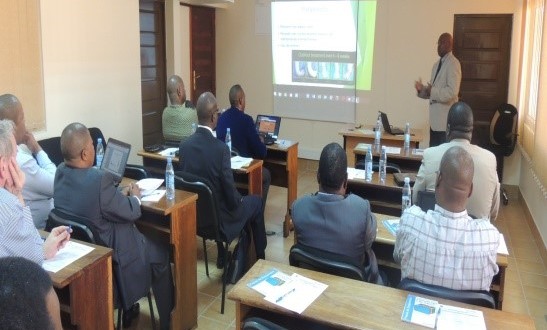 On 31 July was held in Maputo the symposium of the Clubfoot Program, who joined in the same room 32 health professionals among Medical, Technical Orthopedics, Community Directors and Organisations Managers from Civil Society whose object of its activity focuses on health and child. The main objective of the meeting was to share experiences, assess the impact of the Program in communities and strengthen the general guidelines for a more consistent performance. To this purpose, the National Director of Medical Assistance of the Minister of Health (MOH), Dr Ussene Issi, which conducted the opening of the meeting, said the program has contributed significantly in materializing the general plans of health care to the population, embodied in the Government Program. Therefore expressed satisfaction with the results and recommended that the partners in this program, namely, the MOH, MIHER and CURE INTERNATIONAL enhance synergies aimed at extending the same to the provinces not covered yet. The Clubfoot Program is implemented since 2013 in Maputo City, Tete, Sofala, Zambezia, Nampula and Cabo Delgado, having treated 710 children.

In this symposium, participants deepen their knowledge on the Clubfoot, its causes, treatment and prevention as well as analyze the psycho-social component of congenital deficiency.

During the meeting, participants identified two (02) aspects to be improved, in particular, the quality of information to be channeled to the central decision-making bodies and community awareness, so that more parents take children with Clubfoot to the nearest Health Unit as soon as possible.